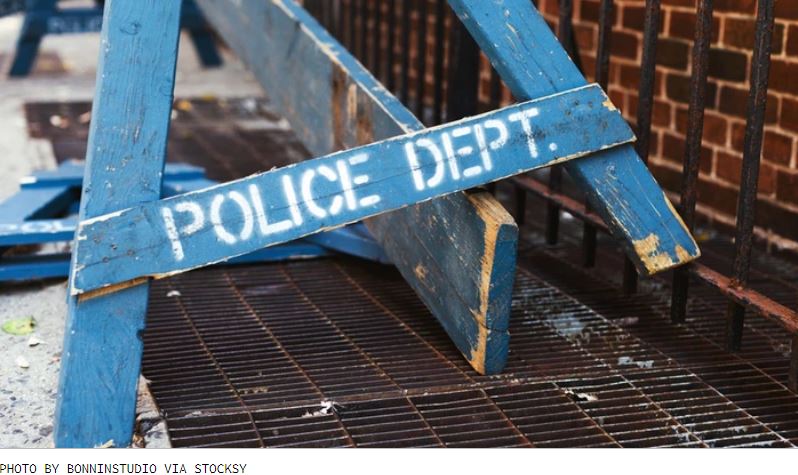 A Genesee County sheriff’s deputy turned firefighter, is one of 17 arrested during a human trafficking sting in Flint, Michigan.

Court documents show that  Matthew J. Hyde, 40, was charged with Accosting a Child for Immoral Purposes, Sexually Abusive Activity to a Child, and Using a Computer to Commit a Crime.

The investigation began in March of 2020 and ended in late August.

This is just one of many human trafficking cases to surface within the past week.

In Ohio, Marshals recovered 25 children between the ages of 13 and 18.

Information gathered from human trafficking victims who have been caught up in police investigations suggests they rarely seek law enforcement assistance because the victims do not trust the police.

The answer is because many times police are involved in drug or human trafficking…or both.

A number of police officers have been arrested for their involvement in such cases.

In 2014, DC Metropolitan Police Department Officer Linwood Barnhill, Jr. resigned after investigators found that he has been keeping a 16-year-old girl in his apartment. While he was holding her captive, he had been training her to have sex with men. While he was conditioning her, he took dozens of nude photographs that were later found. The same officer had also set up a meeting with a 15 and 17-year-old. In all three cases, the officer promised the girls they would be famous models. Instead, he was pimping them out to older men.

A second DC officer, Marc Washington, did the same thing to a 15-yeard old girl who had run away from home. He made the girl strip and took nude photos of her. The girl told investigators that Washington said taking the photos was “part of the process” for runaway girls. Washington committed suicide after learning that he was being indicted. A search of Washington’s home and phone revealed that he had been involved in human trafficking for nearly five years.

There were 38 girls missing in DC at the time these officers and others were arrested.

Baltimore City police officer Lamin Manneh was arrested after undercover officers saw that a teen had been placing ads online for sex. It was later learned that the officer was the teen’s pimp and was selling her.  Manneh would drive the girl to meet those willing to pay.

Mauricio Edgardo Estrada, 28, a Los Angelas police officer, was busted for human trafficking of a child during an undercover operation.

Another eight officers — four in Oakland and four in Richmond — were also arrested.

However, the biggest bust came in 1998 when FBI agents, after a 2-year investigation,  arrested 44 police officers from five different Ohio agencies for their involvement in a heroin trafficking ring. During the investigation, it was also discovered that many of the officers were involved in a prostitution ring in which they would get the girls high and then prostitute them out.

From 1994 to 1998, more than 600 police officers had been arrested on drug or human trafficking charges. Between 2013 and 2020 that number has more than quadrupled.

Prosecutors say that officers are obviously not always to blame in areas where there is a significant number of children missing. However, they did say that, sadly, often times the bad guys operate undetected because either they know the system or are getting help from inside the system.

The former NYC Police Commissioner was once quoted as saying, ”There is a new form of corruption. It used to be cops took payoffs to look the other way, for what was usually a more benign activity like gambling.”

Now, it is drug trafficking and prostitution.

Sources include the FBI, DOJ, ICE, and various court documents.