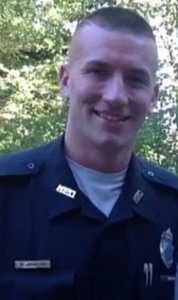 Millis, Massachusetts — A Millis, MA, police officer who sparked a massive manhunt for a suspect who fired shots at him has been terminated after it was discovered that the officer lied about the entire incident.

Officers from other law enforcement agencies, police dogs, a Massachusetts State Police helicopter and firefighters were involved with the search, costing thousands of dollars in manpower and taxpayer money.

The officer has been identified as 24-year-old Bryan Johnson.

Not only did this officer cause a massive manhunt, but he also created unwarranted tension between citizens and police officers across the country.

On September 2, the officer reported that a man in a dark pickup truck fired shots at him. The officer told dispatch that the shots caused him to lose control of his patrol car, which spun around, struck a tree, and burst into flames. The officer said he returned fire during the incident.

At approximately 2:17 p.m., the officer radioed, “My cruiser’s been shot at. I’m at Forest Road. It’s going to be a dark maroon pickup.”

Following the alleged shooting, some officers became infuriated and began using the hashtag #complyordie on social media, many criticizing and blaming the media for the shooting. Several online forums and public Facebook pages have since deleted many of the comments and posts.

On September 3, Millis Police Sgt. William Dwyer held a press conference and stated that the officer lied about the entire incident.

Sgt. Dwyer told the press that ballistic evidence recovered from the scene proved that the officer fired at his own vehicle.

Sgt. Dwyer said, “We have determined that the officer’s story was fabricated.” He went on to say, “Specifically, that he fired shots at his own cruiser as part of a plan to concoct a story that he was fired upon.”

Sgt. Dwyer admitted that this situation only caused a larger divide when it comes to citizens trusting law enforcement. He said he really doesn’t know how to feel right now, but he does not want citizens within his town to look down on the entire department because of one officer’s actions.

Initially, Sgt. Dwyer said that not only would the officer terminated, but that he would also be prosecuted.

Now, Sgt. Dwyer claims that Johnson was mentally unstable at the time of the incident. Sgt. Dwyer announced on September 7, that Johnson would be undergoing a psychological evaluation and will not be arrested and charged until he leaves the hospital.

John Wilson wrote, “Just like a criminal to plead insanity. When will police start taking responsibility and stop blame-shifting? If the police want their lives to matter, then they better realize it’s a two-way street.” He went on to say, “You know, polls have shown that support for law enforcement is at an all-time low. And while I am a huge supporter of our local law enforcement and have donated thousands of dollars over the years, neither myself nor my neighbors will turn our heads for corrupt officers.”

Wilson added, “I recognize that the actions of one officer do not reflect on the service of the entire department, but for Sgt. Dwyer to make excuses is just absurd. This officer was clearly trying to push an agenda that backfired in his face, and he did it only minutes after a bomb threat was called into the school right around the corner from where he crashed and shot up his own cruiser.”

On Monday, Sgt. Dwyer told the press that when Johnson is released he would “still be his friend.”

The officer was a dispatcher who was hired as a part-time officer, and he was training to become a full-time officer. The officer had not even completed the police academy.

He has not given a reason as to why he concocted this story.

We want to hear from you. What do you think about this situation?